That’s the way the people translated what the canons of Sevilla had decided in their meeting in 1401. Unconsciously, they were giving birth to this marvel we see today and which history is amazing. The Cathedral was built in 1402, on the ancient major Mosque(Mezquita mayor)from which it is only kept the modified minaret (la Giralda) and the Patio of the ablutions (Naranjos). By the year 1987, UNESCO declared it World Heritage.

During the seven centuries of history of this cathedral, the Metropolitan Chapter has always been present, keeping celebrations and festivities such as the Corpus and the Blesses Virgin, besides attending to the king and queen devotion for the virgin. During its construction it has undergone different stages or phases that, one by one, have given important contributions to the whole that supposes this impressive Cathedral.

Due to its dimensions, it is the third biggest Christian temple in the world, after Saint Peter’s in Rome and Saint Paul’s in London; and it is the biggest Gothic cathedral in the world. 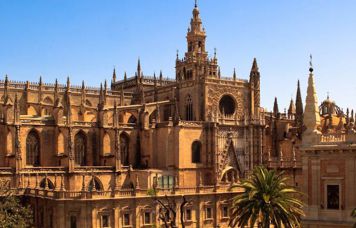 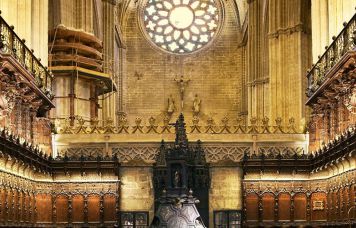