Oval square of about 200 meters in diameter which is “hugged” by a magnificent construction with an impressive tower at the end of each arm. In the middle of the square there is a spectacular fountain.

Representative of the regional architecture, it is made of exposed bricks with polychrome ceramic applications.

The semicircular shape symbolizes the Spanish hug to its former colonies and it looks towards the Guadalquivir River, the way to be followed to get to America. It is mainly decorated with exposed bricks, marble and ceramic which give a baroque and renaissance touch to its towers. The square is surrounded by a channel crossed by four bridges that represent the four former Spanish kingdoms. The walls of the gigantic main building offer a repertoire of benches and tile ornaments that represent the forty eight Spanish provinces with maps of the provinces, mosaics on historical events, the coat of arms of each city and on the sides of the building there are columns with niches in which there were literature, history and art books of each city.

The Spain Square constituted the most emblematic project of the Iberian American Exhibition in 1929. Construction works began in 1914 and it turned to be the most ambitious and expensive project of the exhibition with more than a thousand men working in it at the same time. 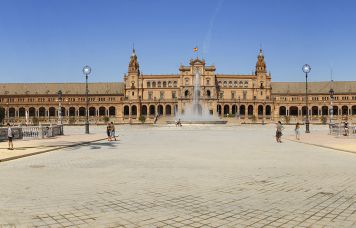 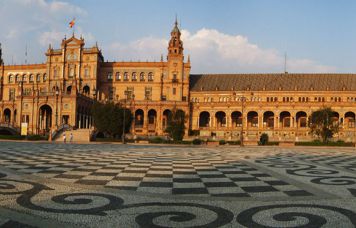 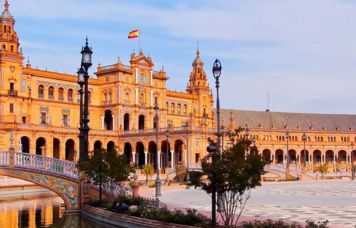