The Plaza de Toros (bullring) of the Real Maestranza de Caballería de Sevilla (Royal Cavalry Armory of Seville) is the venue for the bullfights carried out in Sevilla City, being of special relevance for the aficionados the ones celebrated during the April Fair. It is one of the most popular tourist attractions in the city and it’s among the city’s most visited monuments.

It was built between 1761 and 1881. It has a baroque façade painted in a bright white and golden ocher. The higher sections are covered by a roof supported by marble arches and columns that give a particular personality to this plaza.

The East Gate of the building is the so called Prince’s Door. Only the most successful bullfighters are allowed to go through it straight to the Arena. The Armory has a taurine museum which details the history of bullfighting in Sevilla. Among its collections of bullfighter’s costumes, paintings, portraits and posters, there is a purple cape painted by Picasso. Next to the Armory, there is the venue of the Real Maestranza de Caballería (Royal Cavalry Armory) made by Anibal Gonzalez in 1929. This is the owner of the plaza. It is a peerage corporation that has its origin in the Re-conquest times and that was reorganized in the 17th century.

The Plaza de Toros of the Maestranza de Sevilla ( Sevilla Armory) is considered as well as Madrid’s Ventas one of the most important of Spain and can accommodate more than 12,500 spectators. 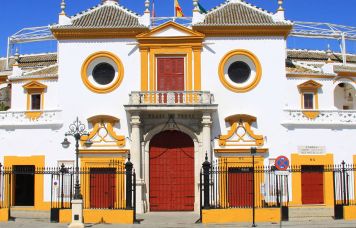 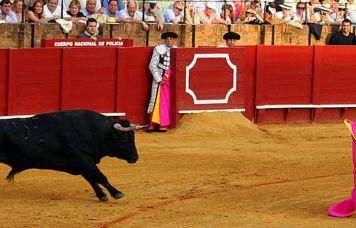 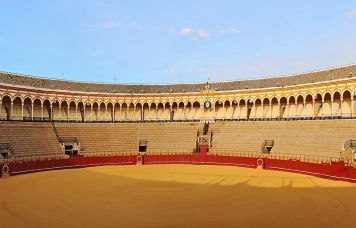